OGLIASTRA CELLAR
Welcome to the Lands of Longevity Ogliastra is located in central-eastern Sardinia, whose territories, due to their unique geographical and pedoclimatic characteristics, are particularly suited for viticulture. It is one of the so-called Blue Zones, areas of the planet in which the environment, nutrition and human relationships have made the living conditions of the inhabitants such as to favor a better and long-lived existence. Wine has always been the basis of the diet, a significant part of the culture and an expression of the sense of belonging of the people who live in the Ogliastra lands where people, like vines, have always lived longer.
Since 1959, the winery has been a reference throughout Ogliastra. The vineyards of its members, distributed in 21 of the 23 Ogliastra municipalities, testify to an important social and productive reality that has been able to grow and renew itself, preserving respect for its traditions, so as to offer wines capable of transmitting the same sensations that you can try them during a walk among our vines, grown in “alberello” and surrounded by bare stone,kissed by the sun in summer. Two hundred members, two hundred lives.
The soul of the Ogliastra winery is the winemakers: women and men with a visceral connection to the lands in which they were born and which they cultivate with passion.
Two hundred stories, two hundred hectares of vineyards. From the mountains to the vineyards overlooking the sea. Every row, every vine and every bunch are treated with dedication from generation to generation so as to preserve the uniqueness that this terroir, so variegated, is able to express. In these lands, the one between vines and vine growers, is a bond that is transmitted from parents to children.
Cannonau’s roots have been in the land of Ogliastra for centuries. The first historical information on this vine dates back to the early 1800s in a text by the historian Vittorio Angius which boasts the goodness of the wines made from it and the wide diffusion of this variety in the Ogliastra territories.
This vine finds here its land of choice, in which it matures a valuable and eclectic grape, from which we express engaging and evocative wines of sensations that every language can translate. Cannonau is the soul of Ogliastra, the portal that leads to the Lands of Longevity.
Here the harvest is a moment full of meanings. The union between the labors of a vintage and the harvest of fruits is transformed into a party, which involves the entire community. On harvest days, which go from September to late October, women and men enliven the vineyards. The grapes are harvested by hand and preserved in small boxes, to be then taken to the cellar, where they are awaited for selection and subsequent vinification. In the Ogliastra Winery we produce wines that are the emblem of this land, ambassadors in the world of Ogliastra identity, pride of the winemakers and all those who work with the company. 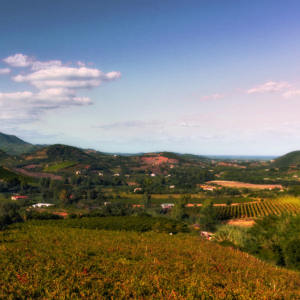